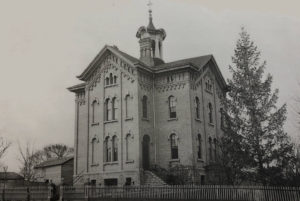 for the children of St. Mary’s Parish, then Pastor, Father Terrence Fitzsimmons broke ground for the stone and brick structure to be known as St. Mary’s Academy in 1874.  The funds for this endeavor were raised by conducting church fairs and by soliciting individual contributions from the parishioners. That building was located at 112 Villa Street, but was not completed until 1880, and is still standing today although is now known as Turner Hall.

In those early years, under the direction of the Sisters of the Blessed Virgin Mary, St. Mary’s Academy for Girls had 175 high school students almost immediately.  Within the first six years, the Sisters soon realized the need to provide for the boys’ education as well.  With the new pastor’s unending support, St. Mary’s Academy found its place in the front rank among educational institutions in the area in a very short time.  Its graduates went on to succeed in many different aspects of life, including as leaders in religious orders.

Under Father Mackin’s supervision, the erection of the current St. Mary’s church began in the fall of 1896.  Located kitty-corner from the old church (at the corner next to the current St. Mary School), the new church was to be Father Mackin’s opus magnum.  Just four months before completion, and after suffering a long illness, Father Mackin died, never having seen his church completed.  Paying off the debt of the new church  while maintaining the Academy became the focus of both the new pastor – Father John McCann – and his parishioners.

The early 1920’s brought many changes to St. Mary Parish.  The Academy on Villa Street was abandoned and ultimately sold for $7,500.  This required a new home for the Sister occupants, now members of the Dominican Sisters of Adrian, MI, who lived on the top floor of the Academy.  The rectory, which was always located within the original church was rebuilt in a separate building. Finally, the old church was demolished and the current school building was constructed beginning in 1924 and concluded in 1925.

Our school has resided in the building at 103 Gifford Street since 1925.  Almost 100 years since this school was built, children from the St. Mary Parish have attended school here.  Father Mackin would be very pleased.